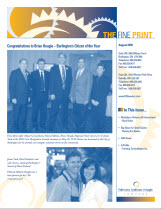 The Small Claims Court exists in Ontario as an avenue to increase access to justice and it is meant to be an easier, less expensive way to resolve disputes than in the higher courts.

Did you know that nearly half of all civil actions commenced in 2007-2008 (for which the most recent figures are available) were filed in Small Claims Court?

In June 2006, the Ontario government asked former Associate Chief Justice of Ontario, the Honourable Coulter Osborne, to recommend improvements to the civil justice system to make it more accessible and affordable. As a result of Mr. Osborne’s report in 2007, the Rules of the Small Claims Court in Ontario underwent several important changes, effective January 1, 2010.

The most significant alteration for anyone contemplating starting a lawsuit, or anyone who is forced to defend themselves against a claim, is that the monetary jurisdiction of the Small Claims Court rose from $10,000 to $25,000, exclusive of interest and costs.

Intimately connected with making litigation less expensive, Small Claims Court procedures are meant to make it easier for litigants to represent themselves, decreasing the necessity for representation by lawyers. Paralegals also have the ability to represent clients.

Some people who choose to represent themselves do so because they want to retain control of their case, or perhaps because they do not hold feelings of affection toward lawyers. But the predominate reason for proceeding without a lawyer is lack of financial resources.

Currently, the vast majority of plaintiffs and defendants are self-represented. Even bulk users of the Small Claims Court system, such as collection agencies, tend to be represented by paralegals rather than lawyers.

Now that the stakes are higher, will there be a resultant increase in the proportion of litigants who choose to be represented by lawyers?

In the past, when faced with potential legal fees of a few thousand dollars, and a maximum damage award of $10,000, a defendant might have chosen to forgo representation or hire a more inexpensive paralegal. Now that the ratio has drastically decreased between the cost of legal representation and the prospective damages awarded, it makes more sense to get the best legal advice and representation possible.

The Osborne Report predicts that with the monetary increase, there will be a substantial increase in the number of filings in the Small Claims Court.

Further, many cases filed in Small Claims Court have been filed on the basis of waiving any amounts over and above the jurisdictional limits, so it is actually difficult to estimate how many more cases this increase will bring.

Some are skeptical about the Small Claims Courts’ ability to handle the anticipated increased case load due to a chronic shortage of fulltime judges, support staff and facilities.

In lieu of full-time judges, the vast majority of small claims in Ontario are heard by about 400 lawyers sitting as deputy judges. In contrast, all other provinces’ small claims courts are presided over by fulltime judges. Some concern has also been voiced as to whether the court’s contingent of deputy judges has adequate judicial expertise and training to address the increased complexity of the higher-value cases now.

Due to the impending strain on the court system, only time will tell whether the changes to the Small Claims Court will indeed serve the purpose of increasing access to justice for all Ontarians.

It imposes new, specific obligations on employers with respect to workplace harassment and violence.

Ontario employers with more than five (5) employees are now required to prepare and implement policies with respect to workplace harassment and violence.

These policies are required to be posted in conspicuous locations at the workplace and must be reviewed by the employer as often as is necessary, but at least annually. The employer’s obligation to develop a workplace policy must be supplemented by the development and maintenance of a program to implement harassment and workplace violence policies.

An employer is required to ensure that it has procedures in place for the purpose of controlling risks identified by assessments, summoning immediate assistance, reporting incidents, and investigating and dealing with incidents or complaints that arise. This imposes the obligation that an employer conduct violence assessments as often as is necessary to ensure that its workers are adequately protected. The results arising from each assessment carried out by an employer are required to be reported to the company’s joint health and safety committee or the company’s employees.

Pursuant to Bill 168, an employee will have the right to refuse work if workplace violence is likely to endanger them. In the event such a situation arises, the employer is under a positive obligation to investigate work refusals.

If the employer carries out a workplace investigation, and workplace violence continues to endanger a worker who has refused to work, the worker may continue to refuse to work.

Bill 168 also imposes an obligation on the part of the employer to contact the Ministry of Labour for the purpose of arranging for a workplace refusal to be investigated. An inspector will be appointed by the Ministry of Labour for the purpose of determining whether an employee or another person is likely to be endangered in the workplace. Pending an investigation, an employee is required to remain in a safe place close to his or her work station or may be assigned to a reasonable alternative workstation.

Employers who fail to comply with their obligations arising under Bill 168 to protect employees against violence and harassment in the workplace may be subject to sanction.

In light of the severity of these penalties, it is imperative that every employer in Ontario with the obligation to comply with Bill 168 ensures that it develops a formal written policy to address and deal with workplace violence and harassment.

Bill 168 broadens and extends the scope of harassment beyond its prohibition under the Ontario Human Rights Code. Is your business complying?

Did you know that in January 2003, Feltmate Delibato Heagle LLP opened in its Burlington office a permanent art display known as “The Hall of Art” in support of the Burlington Fine Arts Association and emerging local artists? We invite you to enjoy this experience during our regular business hours.