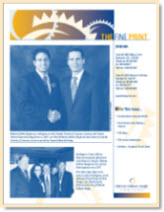 It’s a competitive world. In recognition of this, employers frequently attempt to protect themselves against their competitors through the use of non-solicitation and non-competition covenants.

In the Staebler case, two employees with written non-competition covenants resigned their employment and began selling commercial insurance for a competitor of Staebler. Within two weeks of their departure, approximately 120 clients moved their business from Staebler to Staebler’s competitor. Not surprisingly, Staebler brought an action. The non-competition covenant that was the focus of the litigation stated: “In the event of termination of your employment with the Company, you undertake that you will not, for a period of 2 consecutive years following said termination, conduct business with any clients or customers of H.L. Staebler Company Limited that were handled or serviced by you at the date of your termination.”

At trial, the presiding Judge found that the non-competition covenant was enforceable and awarded Staebler $2,000,000 in damages. The Court of Appeal disagreed with the trial judge’s decision. It proceeded to overturn the trial judge’s decision. In doing so, the Court of Appeal held that restrictive covenants will be enforceable only if the covenants are appropriate to the specific situation in question, and only if their reach is both reasonable and clearly defined.

(1) The covenant was too wide in scope. The clause contained no geographic limit on the activities it sought to limit. The former employees of Staebler, if held to the covenant, would have been restrained from doing business with former clients of Staebler “even if they relocated to the far reaches of Ontario, or for that matter, elsewhere in Canada”; and

In part, the Court’s decision was likely motivated by the fact that non-competition clauses run contrary to the public interest in free and open competition. Conversely, courts are reluctant to restrict the right of employers and employees to freely enter into contracts.

Generally speaking, a restrictive covenant is enforceable only if it is reasonable between the parties and consistent with the public interest. In determining “reasonableness”, the Court will consider the overall assessment of the clause, the agreement within which the clause is found, and the surrounding circumstances. Three additional factors will also be included, as follows:

1) Whether the employer has a proprietary interest that is entitled to protection;

2) Whether the time period or the geographical location that the restrictive covenant covers is too extensive; and

3) Whether the restrictive covenant is unenforceable because it is against competition generally and is not limited to prohibiting solicitation of clients of the former employer.

In order to ensure the enforceability of a restrictive covenant, it must be drafted with care and specificity. It must also reflect not only the interest of the workplace parties, but the public interest as well. Most significantly, any failure on an employer’s part to minimize the scope of the restrictions imposed by a restrictive covenant will almost certainly render the covenant unenforceable. During these difficult and precarious economic times, employers cannot afford to overlook the important role of restrictive covenants – and how they can work to help protect their business interests.