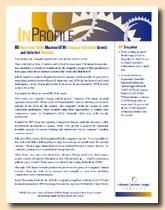 “My philosophy is this: If you are a strong president, your management team should be able to run the company without you."

In this issue, read about how Mischa Weisz's successful business approach has resulted in his company, TNS Smart Network Inc., to operate more than 50 percent of the ATMs deployed by financial institutions accross Canada.

Forecasting your company’s growth rate is an inexact science at best.

That’s why Mischa Weisz, President and CEO of Toronto-based TNS Smart Network Inc., was careful not to sound too boastful about his company’s prospects when profiled in a front-page article in the business section of the Globe and Mail in 1999.

Still, he wanted to position the privately-owned company - which provides the gateway for networking services between financial institutions and ATMs in the financial and retail marketplace – as the clear market leader in the sector. So, he responded: “We’ll be lucky to hit 2,700 ATMs.”

Fortunately for Weisz, he was wildly off the mark.

2006 marks the company’s largest annual growth. Currently, TNS Smart Network operates close to 9,000 “White Label” ATMs nationwide. This accounts for more than 20 percent of the ATMs in the country. The company’s ATMs are located in every conceivable marketplace. Their locations range from supermarkets to casinos, bars, convenience stores, to Gentlemen’s Clubs (formerly called strip clubs for the uninitiated).

Founded in 1997 when the Canadian Competition Bureau made the decision to allow non-financial institutions to operate ATMs, TNS’ growth is spurred by Canadians’ insatiable appetite for instant banking and underscored by his company’s excellent customer service.

Still, even Weisz seems a little nonplussed by his company’s success. “I’m responsible for four and a half billion dollars going through the economy on a yearly basis,” he says with candour. “This is a bigger figure than the Gross National Products of some countries,” he continues, putting his accomplishments into perspective.

Then, Weisz - who can’t resist a little levity - declares: “People need to be a little caustic, to have a sense of humour in business or they will just crack up……I said to someone at a dinner party recently: ‘I can cause a recession by just closing down all my ATMs’.”

Although TNS Smart Network provides 90 percent of the group of companies’ annual revenues, Weisz has built on its synergies and strengths to open three subsidiary companies to serve related markets.

Unlike many entrepreneurs whose start-up and ongoing operational costs rely on loans and credit lines, Weisz prefers to expand his companies’ reach through selffinancing.

“I’ve never borrowed any money. I started this company with $5,000,” remembers Weisz. He previously had a 20-year background in credit unions. He started as a file clerk and worked his way up to teller and later, IT positions.

“I live and grow by cash flow. TNS acts as the angel investor, the supplier of the growth of the other three companies…hopefully they will pay it back,” he says.

Secondly, as to his management style, Weisz prefers to delegate, but still, provide definite and clear benchmarks for his managers and employees as to his expectations of their performance.

“I make every manager sign a declaration every month that he or she has completed all the critical items correctly. For example, every month my Controller has to sign off that we have paid the GST and all the other taxes. My IT manager signs off that he has done all the appropriate backups.”

He pauses; falling back on his sense of humour, surveying the business landscape: “If public companies would do this, Enron Number Two will never happen.”

Weisz, who also owns a small part of theHamilton Bulldogs Junior A hockey team,goes into the companies’ office only once every week or two. He prefers to concentrate in the peace and quiet of his home.

“My philosophy is this: If you are a strong president, your management team should be able to run the company without you.”

He continues: “I’ve watched Star Trek all my life. If you look at any captain in the ongoing series, he or she is not down in engineering. The captain is sitting in his chair on the bridge, thinking about what actions to take next.”

Overall, Weisz values self-reliance: “Every entrepreneur ideally should have the same opportunity, be at the same starting line,” he says wishfully. “Where you end up is up to you.”