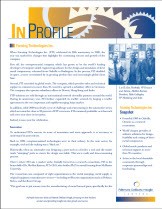 The result would be an immediate improvement in balance sheets through significant savings in development time and material costs.

When Forming Technologies Inc. (FTI) celebrated its 20th anniversary in 2009, the year was marked by changes that highlight the continuing success and growth of the company.

First off, the entrepreneurial company, which has grown to be the world’s leading developer of computer aided engineering software for the design and simulation of sheet metal components, relocated from Oakville to Burlington. In the process, FTI doubled its space, a move necessitated by its growing product line and increasingly global client base.

FTI® solutions are sold through an international network of reseller partners around the world. During its anniversary year, FTI further expanded its reseller network by forging a reseller agreement in the very important and rapidly-emerging Asian market.

In addition, while 2009 was clearly a year of challenge and restructuring in the automotive sector, which accounts for close to 90 percent of FTI’s revenues, FTI remained profitable, as it has each and every year since its inception.

Indeed, it was a year for celebration.

To understand FTI’s success, its sense of innovation and team approach, it is necessary to understand its antecedents.

Back in 1989, computer-assisted technologies were in their infancy. In the auto sector, for example, tool and die making was a “black art.”

Historically, when an automaker was designing a part such as a fender, a tool and die maker made “stamping” parts to ensure the design was viable. This was a costly and time-consuming process.

There’s where FTI saw a market niche. Initially formed as a research consortium, FTI is the brainchild of Dr. Medhat Karima, FTI’s CEO, who holds a Ph.D. in metal forming from McMaster University.

The consortium was composed of eight organizations in the metal stamping, metal supply or original equipment manufacturer sectors — including well-known organizations such as Dofasco, Stelco, and the Rover Group.

“The goal was to put science into the manufacturing of metal formed parts, specifically for the automotive industry, so that the process would be repeatable and predictable,” says Ken Harbottle, vice-president, finance and administration.

If this could be achieved, the result would be an immediate improvement in balance sheets through significant savings in development time and material costs.

Partially funded by the Ontario government, research progressed so well it attained “proof of concept” after the first four-year contract, which was renewed to make “prototype” software.

“This was innovative technology in the real sense; very entrepreneurial,” says Harbottle. During the research phase, there were close to 18 Ph. Ds on staff. Today, this has grown to more than 40 Ph. Ds and professionals, in 2010.

Following the conclusion of the second contract, and the disbanding of the consortium, FTI developed the software further to make commercially viable products.

In addition, FTI began to offer an extensive curriculum of hands-on Metal Stamping and Welding Training courses delivered by industry experts. To date, FTI has trained more than 12,000 engineers in Formability and Die Design and is considered Best in Class for its industry training programs.

“FTI is proud to have played a role in converting Forming and Cost Feasibilities from a black art into a Computer Assisted workflow that is an integral part of day to day routines,” says Dr. Karima.

Looking ahead, Dr. Karima notes that “there are still significant opportunities for productivity improvements by converting the current computerized tryout into an engineering discipline.”

As such, “FTI is helping our customers develop a robust, lean and repeatable process and is empowering them with significant cost reduction opportunities and reduced time to market,” he says.

FTI’s clients are concentrated in the automotive sector, with a small, but growing client base in the aeronautics, electronics and appliance sectors.

The company’s products translate well into other manufacturing sectors, allowing FTI to diversify its client base.

“Sheet Metal comes out in a roll; if you are going to stamp a fender, you want to use the smallest piece of metal so there is the least waste possible,” explains Harbottle. “Using our software, the designer takes the final design and ‘unfolds’ and ‘nests’ the metal, figuring out the minimum amount of material required.”

But if you change the material from steel, let’s say to cloth, then many other markets for FTI’s software emerge. For example, a major manufacturer used FTI’s Blank Nest Software to “unfold” its diapers.

Other non-traditional applications that FTI’s clients have found for its software include forming or unfolding boat hulls, canvas tents, architectural design of a temple, guitar detailing, locomotives in India, street lights in Russia, car windshields and car seats.