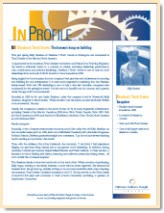 The honours keep on building

Founded in 1989 by Pat and Gayle Sheehan, today the company is led by 38-year-old Kelly Sheehan, daughter of the founders.

This past spring Kelly Sheehan of Sheehan’s Truck Centre in Burlington was nominated as Truck Dealer of the Year for North America.

Co-sponsored by the American Truck Dealers Association and Heavy Duty Trucking Magazine, the award is evaluated based on a number of criteria, including dealership performance, civic contributions and industry leadership. Sheehan’s Truck Centre is one of only six truck dealerships from across all of North America to be nominated in 2009.

Being singled out by your peers for your company’s best practices and achievements is exciting and fulfilling for any entrepreneur. It is even more impressive considering that the Sheehan family-owned Volvo and GM dealership is one of only a very few Canadian companies ever nominated for the prestigious award. It is also one of a handful run by a woman and a person under the age of 40 to be nominated.

Founded in 1989 by Pat and Gayle Sheehan, today the company is led by 38-year-old Kelly Sheehan, daughter of the founders. “While we didn’t win the award, we were absolutely thrilled to be nominated,” she says.

Ironically, it was a business environment economy much like today that set Kelly Sheehan on her successful career path. In 1992, fresh out of McMaster University with a Bachelors Degree in Political Science, Sheehan graduated straight into a recession. “I got lots of nice letters thanking me for sending in my resume,” she recalls.

Then, with the resiliency that is her trademark, she continues, “I was lucky. I had experience helping out part-time doing clerical jobs at my parents’ truck dealership. In addition, during university I worked part-time for lawyers Miles Feltmate and Fulvio Delibato. At their law firm, I learned a lot about dealing with clients, financing and collection issues, franchising, leases…all sorts of skills that a business requires.”

The Sheehan family is close knit and looks out for each other. Within months of graduating, Kelly began working at the family business, a move she has never regretted. She learned the business from the ground up, initially working as an accounts receivable clerk, even attending the American Truck Dealer Candidate Academy in the U.S. She has served on the Volvo Dealer Council for five years and continues to chair council committees, including, at present, its Distribution Committee.

Over time the business grew to include valuable insight and commitment from other family members, too: Kelly’s brother Dennis, 36, is executive vice-president and partner; while brother Kevin, 27, is a sales representative and manages the truck leasing division.

The truck sector, as with many industries, is highly cyclical. Kelly’s father, a truck driver turned entrepreneur, had earned an enviable reputation as a specialist in used trucks. As a dealer of both used and new trucks, he had grown the business rapidly throughout the 1990s. When he retired in 1999, and Kelly took over as chief executive, she once again ran straight into a slowing economy.

“We had grown fast over the boom years and were at peak capacity,” she recalls. “We learned a lot of valuable lessons from that time period.” One of the key lessons is to encourage the approximately 60 employees to work overtime when business is brisk, rather than opting for new hires.

Currently, sales of new trucks have slowed, reflecting the economy. Yet Sheehan Truck Centre`s strength in the used truck and service sectors of the business means that the company is weathering the storm fairly well.

“We try to partner in as many of our employees and managers as possible by allowing them to share in the company’s success through their financial compensation package,” she says. “Each of them has a vested interest in making the business work.” Approximately 25 percent of the employees have been with the company more than 10 years, with another 30 percent onboard more than five years.

Many of the company’s clients are from Eastern Europe, so the sales and service staff includes those with Polish or Russian language skills. The company`s marketing strategy also includes advertisements in publications that circulate within the Russian and Polish communities. The company gives back to its client base community by sponsoring community events such as Polish Day at Ontario Place and assisting a soccer team in the Polish community.

Born and raised in Burlington, Kelly Sheehan resides there with her husband, local dentist, Craig Paszt. They are raising their two young children in what Kelly calls a “wonderful community.”

Sheehan`s trucks are a familiar feature at local parades. “We’ve hauled floats at events such as the Burlington Sound of Music Parade and the Christmas Parade.

” Each Christmas Sheehan’s Truck Centre sponsors local families with food, non-perishable clothing and toys. Last year one sponsored family asked for, and received, a membership to the local YMCA. “We receive heart wrenching letters of thanks. It’s a pretty humbling experience for us and reminds us of how lucky we are,” she says.