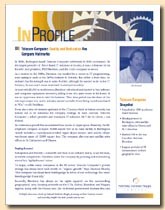 Quality and Dedication Are Company Hallmarks

"We don't give them financial quotas, or institute quotas on the number of calls they need to make. In reality, each of them really has a lot of freedom."

In this issue, read about how Phil Davidson, founder and president of Telecom Computer, grew his homebased business to become the largest provider of IT infrastructure in their geographic area.

In 2006, Burlington-based Telecom Computer celebrated its 20th anniversary. As the largest provider of Tier-1 based IT solutions in its area, it was a milestone for it
founder and president, Phil Davidson, and the entire company to savour.

As a student in the 1980s, Davidson was headed for a career in IT programming, even opting to study at the DeVry Institute in Toronto. But within a short time, he realized that his strength was in sales. Further, although he wanted to be in the IT industry, he was much more interested in entrepreneurship.

Armed with $5,000 in seed money, Davidson left school and started to buy software and computer equipment inventory, selling it out of a spare room in his home. It was an opportune time to start his business. "That time period was the dawn of the micro processor era, as the industry started to evolve from being mainframe-based to PCs,” recalls Davidson.

It was also a time of extreme optimism in the IT sector, which as history records, has turned out to be notorious for company closings. In stark contrast, Telecom Computer – which provides and maintains IT solutions 24/7 for its clients – has thrived.

Its continuous growth has necessitated four moves to larger space. Presently, the 80- employee company occupies 16,000 square feet at its main facility in Burlington (which includes a manufacture-certified repair depot centre), with nearby off-site warehouse space of 12,000 square feet. The company also operates satellite sales offices in St. Catharines and Ottawa.

Soft-spoken and friendly—outwardly laid back in an industry that is, to say the least, stressfully competitive—Davidson steers the company by pursuing and maintaining several key, highly-focused values.

To begin, unlike many companies in the IT sector, Telecom Computer’s growth strategy has always been built strictly on "organic growth." Says Davidson bluntly, "Our company has always been leading-edge in terms of our technology, but never bleeding-edge financially."

Secondly, Davidson has always set his sights squarely on the surrounding geographical area, focusing primarily on the GTA, Halton, Hamilton and Niagara regions, along with the Ottawa area (for its federal government business that alsospills into his target area). “We know and understand our community,” says the Burlington resident.

At the same time, Telecom Computer maintains a watchful eye to ensure that its
client base is well-diversified in both sector and size. This explains why, five years ago, as the company grew, Davidson brought Jim Naysmith on board as general manager. A former Canadian Director of Sales for a Tier-1 manufacturer, Naysmith, who also lives in Burlington, brought skills garnered from working with a large organization.

"Our client companies range in size from 50 to 2000 computer users,” says Naysmith, who oversees daily operations. “This includes departments of the federal government (27%), municipal government, boards of education, and the health sector (30%), and private enterprises that range from multi-nationals to entrepreneurial ventures,” he explains.

Quality all the way

The company – which continues to highly invest in its engineering and technical teams – has aligned itself with all the major Tier-1 manufacturers.

Sales reps are highly-trained too, and moreover, highly-valued for their contribution to the company. This attitude has paid off in dividends, both for Telecom Computer, and its clients, some of whom have dealt with the same sales reps for many years, thereby ensuring continuity in their IT installations and support.

In fact, in an industry sector where employee turnover is staggeringly high, Davidson’s employees—ranging from administrative, to sales to technical—have proven to be extremely loyal.

“For example, we treat sales employees as entrepreneurs,” explains Davidson, noting that sales staff employee turnover is a mere 3 per cent annually. "We don't give them financial quotas, or institute quotas on the number of calls they need to make. In reality, each of them really has a lot of freedom."

Looking forward, both Davidson and Naysmith highlight one real growth area: the burgeoning number of small and medium-sized companies (25-70 employees) in its target area, which is becoming known domestically and internationally for its rapid economic development. “There’s a real spirit of innovation in this part of the country,” suggests Davidson.

A devoted father, Davidson, who has three children, spends most of his off-work hours with his offspring. High on his list of activities is ferrying his 7-year old “hockey fanatic” son to the hockey rink five days a week. A sports enthusiast, Davidson plays hockey locally and skis.

A confirmed community booster, Davidson is also committed to the betterment of his local area, supporting local institutions such as the Joseph Brant Hospital and Carpenter Hospice.