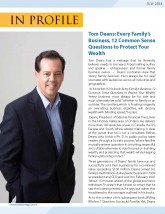 Tom Deans has a message that he fervently believes needs to be heard. A best-selling author and speaker – entrepreneur and former family business owner – Deans’ contrarian view that “every family business must always be for sale” resonates with audiences across all industries and geographies.

As he writes in his book Every Family’s Business, 12 Common Sense Questions to Protect Your Wealth, “every business must always be for sale and must ultimately be sold,” whether to family or an outsider. The corollary, which is “making longevity an overriding business objective, will destroy wealth with blinding speed,” he says.

Deans, President of Détente Financial Press, lives in the Hockley Valley area of Ontario. He delivers more than 100 speeches a year in Canada, the US, Europe and South Africa, always making it clear at the outset that he is not a consultant. Rather, Deans, who holds a Ph. D. in public policy, takes readers through a Socratic process “where families mutually answer questions in a trusting, respectful and collaborative way to stay focused on building wealth, and protecting that wealth while keeping family relationships intact.”

Three generations of Deans’ family have run and successfully sold their businesses for a combined value exceeding $100 million. Deans joined his family’s multimillion-dollar plastic business in 1999 as president and CEO and sold it in February 2007 “about 15 minutes ahead of the global economic meltdown.” It wasn’t that he was so smart that he saw the looming recession, he says, but rather that he adhered to the concepts outlined in his books.

As to the content of his subsequent book, Willing Wisdom:7 Questions Successful Families Ask, Deans notes that more than 125 million adults in Canada and the US have no will. Further, most adults who do have one, never discuss its contents with intended beneficiaries. This is illustrative, he says, “of the bizarre cultural fact that we keep our greatest gifts secret from those we love and intend to support.” He believes “it’s the conversations that proceed the giving that are the gift and create extraordinary, beneficial family dynamics.”

Greatest job on the planet As with so many entrepreneurs, once Deans sold his business he was at a crossroads. “I had to make a personal decision,” he recalls. Should he continue in manufacturing where he had a track record of success, or “share my own and my family’s experience and insight into family business and turn from extracting to contributing?”

His decision to use his knowledge to become a thought leader on the subject of inter-generational wealth transfer led to what he now regards as “the greatest job on the planet.” During his speeches he’s “not selling anything except my ideas, as the event planner has already bought my book(s) and so people in the audience hear me differently.”

Not only is Deans’ career rewarding in terms of his public speaking and book sales, he finds it “fulfilling as people share their phenomenal stories, the chaos and the heartbreak in their own families about the intersection of money, relationships, power and control, and their subsequent gratefulness for a glimpse of a resolution to what can feel like impossible problems.”

“Entrepreneurship is the courage to be different.”

So whether it is a different product or service, a different way of distributing your product, or an audacious brand, says Deans, “the more different and unique and contrarian it is, the improved probability the world will take notice as courage is a value that people put a premium on.” Often success, he believes, really requires more courage than work. As example, Deans is not a lawyer, but he wrote a book on wills.

For Deans, and he believes, for many entrepreneurs “the lure of money, the promise of riches will propel you only so far. There is surplus in the world and operating as an entrepreneur from a place of gratitude for that surplus is perhaps the most important quality of the business model.”